Well, it had to happen at some point. Here’s a Fear Street book I didn’t really enjoy much. What’s weird is this is a fan favorite. It wasn’t awful, really, but compared to the other two Fear Street books I’ve read so far, this one was lacking. I’d love to hear what anyone particularly enjoyed about this book if a fan happens to read this review.

It is more of a murder mystery than a horror novel, though it does have some scary moments that kept me turning the page, or rather clicking my Kindle screen during the late hours of the night. And the word “mystery” is generous in my description of the novel because there’s very little mystery. It’s pretty obvious who did what, and the “why?” was uninspired. That’s my biggest reason for not enjoying this installment as much as the last two I read, but what I enjoyed about the book is what Stine does best: the story kept me turning pages. Although what happened was somewhat obvious and a let-down, Stine had me wanting to know what was going to happen next.

Like all of my book reviews, spoilers are scattered throughout this entry. Maybe avoid this entry if you care about being spoiled. (But be sure to come back after you’ve read the book!)

This actually isn’t a terrible cover. I like the look of fear on Deena and Jade’s faces, and I like the dark scene outside the window with the scary house, tree, and full moon. What I don’t like is mostly technical: if this is an illustration of the part of the book where they dial a house on Fear Street, everything’s wrong. Chuck is who dialed the number on Fear Street, and he did it in their living room if I remember right. The dark scene outside the window is likely Fear Street, but Deena doesn’t live on Fear Street. Finally, none of the prank calls Deena and Jade made alone were scary.

Tagline: It began as a prank… and ended in murder!

I actually like this tagline! It’s chilling and gripping. Only, you guessed it, it’s inconsistent with what happens in the book. Chuck, Deena, and Jade aren’t prank calling a house on Fear Street, but rather Chuck called a house on Fear Street to prove something to Deena and Jade. A woman just happened to answer the phone who was being murdered.

Deena, Lea’s best friend in The Secret Bedroom is actually the protagonist of this story! She and her friend Jade begin the story by doing Jade’s hair out of boredom. They are excited about school starting back soon because it’ll give them stuff to do. Jade stumbles across a new phone Deena’s father brought home from work. With a speaker function and the ability to program phone numbers into the phone to be dialed by pressing just one number, this phone is the latest technology at the time this story takes place. I probably would have been more impressed if I weren’t actually reading this book on my phone.

Jade gets the great idea to prank call her sister and then some kids from school. Deena gets in with the action and flirts with a guy at school named Rob who she has a crush on. They stop and begin talking about Chuck, Deena’s half brother who is coming to live with her family. Chuck is a hard-ass and has gotten kicked out of his school for reasons unknown to Deena and the reader. We never find out why he got kicked out. He’s an upstanding gent, though.

The next day after Deena and her father pick Chuck up from the airport a nasty crash happens in front of them. Deena’s father instructs the kids to get out of the car because it’ll be safer outside. Chuck and Deena wander away from their father to toward a flaming car at the front of the line. A little boy cries about his dog being stuck in the car, and despite people yelling that it’s going to blow, Chuck makes a mad dash for the car and rescues the puppy. I think this scene only exists in the novel to show that Chuck is a good person, despite his tough exterior. We may have felt differently about him the next day when he got in a knife fight at school.

Jade comes back to Deena’s house after school one day, and they begin their prank calling again. They hear interference on the other line, which turns out to be Chuck listening in. He decides to join in on the fun, but with more gravity. He calls a kid at school and pretends to be a ghost, and then he calls a bowling alley and reports a fake bomb threat.

Some time passes, and Deena starts to feel guilty about the prank calls. At dinner one evening she tells Jade and Chuck, who are now an item(!), that the pranking should stop. They surprisingly agree. Conversation changes to Fear Street, and Chuck decides to call a random number on Fear Street to prove to Deena and Jade that real people live there. A woman picks up the phone and screams for whoever is on the other line to help her, because she’s being murdered. A man gets on the phone and asks who is on the other line. He tells them that they called the wrong number. From the scene with the dog from before, we know that Chuck can’t just let a woman be murdered, so he decides to go to the house he called (the address is in the phone book) and check on the woman. Jade and Deena reluctantly accompany him.

When they get to the house, they find the back door broken in and the house strewn apart; couch cushions are shredded and things like that. They also discover a masked man who gives chase. Chuck picks up the knife that was used to stab the woman and throws it at the masked assailant, but misses. The teens run to their car and drive away, but the masked man gets in a car and continues to chase them. He chases them all the way home, but then backs away mysteriously. I knew right here that Chuck was going to be framed for the murder.

Cops show up at the house at 2AM to question Chuck and Deena, and they end up arresting Chuck because his hand prints are found on the knife and because the dead woman’s husband described him. Deena and Jade explain what happened and admit to the prank calling that started everything, but the police don’t believe them and keep Chuck in jail.

Deena and Jade decide that they must prove Chuck’s innocence themselves. They are convinced that the woman’s husband committed the murder, and they are determined to find evidence. They wear fake wigs and makeup so that they can inquire about jobs at the restaurant the man owns while they snoop around in the process. They find nothing there, but while there, they learn the name of an assistant who quit the restaurant and go to her house to interrogate her. The man, Mr. Farberson, naturally calls the woman while they are there and she asks him to come over to pick up something she can no longer keep in her house. Furthermore, they discover Mr. Farberson and this woman are lovers. Deena and Jade decide to scat before Mr. Farberson gets there lest they be recognized. They spy on the woman as Mr. Farberson arrives, and sees her hand Mr. Farberson a package. Deena just knows it’s the mask he was wearing the night he killed his wife. They follow him to see where he disposes of the package. He ends up throwing it away in the dumpster behind his restaurant.

Deena and Jade naturally decide to dumpster dive. This takes several pages because they get caught by restaurant workers and then have to come back at night. They find the package in the dumpster and open it to discover a… dead cat. Seriously. Another dead cat. I think R. L. Stine hates cats. They rush to their car, and Mr. Farberson is waiting for them in the backseat, wearing his mask. He tells them to leave him alone and never come back.

The girls sneak into Mr. Farberson’s house and find a note in his office from his deceased wife. It states that she is leaving Mr. Farberson because among other things (I assume), his restaurant is not successful and she’s not spending anymore of her inheritance on it. And there is the motive. Unfortunately, but naturally, Mr. Farberson comes home. He eventually discovers the girls and knocks out Jade while Deena attempts to get away. She doesn’t. He drags her back up to the bedroom he has Jade in, and asks them how much they know. They admit to knowing everything I knew after I first read about the murder. This plot is excruciatingly predictable. We know all what you did, Mr. Farberson. He decides they must die and leaves the room to get something. Deena and Jade push a piece of furniture against the door to stall Farberson. We’ve all seen scenes like this before. 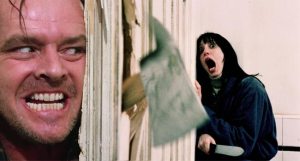 Deena and Jade escape out a window onto a tree. Mr. Farberson runs downstairs and comes outstairs with a chainsaw. He begins chainsawing down the tree in the middle of the night. Before the girls can fall on the saw, sirens erupt in the air as cops come to save the day.

It turns out the police suspected Mr. Farberson all along, and decided to keep Chuck in jail to fool Mr. Farberson into thinking that Chuck was the lead suspect. Mr. Farberson is arrested. Chuck is freed. All ends well.

While engrossing and page-turning, this novel would have benefited from a twist. I knew Mr. Farberson was the killer from the beginning, and his reasons for killing his wife weren’t all that interesting. It was bland, like this book. This book was kind of bland.

This book fails to trump either of the Fear Street books I read before it. It easily falls to the bottom of the list.

Shadyside.blog is a book reviews blog. My name is Todd, and I am your host and entertainer this morning, afternoon, evening, or night. This blog primarily focuses on book series I read as a kid and am making my way through at a glacial pace as an adult, but I do (at least plan to) discuss other books. Read the About page to learn more about me and what I am doing here.

Even when I am too busy to update this site, I am thrilled that you are here, and I would love to discuss these books with you. Leave a comment on a post about my review or your own thoughts on a book, and I will always reply. Please, please get your nerd on with me. Slappy would want you to.

Thanks for visiting. I really hope you enjoy your stay. :)

Due to the nature of reviewing and analyzing, and because it is hard to distinguish between what is a spoiler and what is common knowledge in older books and series, spoilers are unmarked in posts. You may inadvertently spoil yourself if you read a post about a book you have not read. Please read with caution.